Provide a unique paved surface for a historically sensitive neighborhood.

:
Montgomery, Alabama's state capital, was founded in 1819 along the Alabama River. After 187 years of ups and downs, civic leaders felt the community was poised for rediscovery. In 2006, they met with planning firm Dover, Kohl & Partners to develop a downtown master plan to guide future growth. Their goal was to provide a road map to 21st century development while preserving the city's 19th century character.

One area selected for redevelopment is an area of the city known as Five Points, which borders the historic Cottage Hills neighborhood. Developers wanted to replace an awkward intersection of five streets with a new, safe roundabout. They chose multipiece Belgian Cobble pavers from Block USA to do the job in an attractive, thoughtful way.

These pavers were first used in 2007 when the city decided to reopen and repave a roundabout circling its historic Court Street Fountain. “We wanted something historically accurate, but the surface also had to be functional as a street,” said City Engineer Chris Conway.

Belgian Cobble pavers are a perfect choice for historic perservation. They are produced in eight distinctive shapes with the look of old reclaimed cobblestones. Because each shape is laid randomly, Belgian Cobble pavers provide a true Old-World cobblestone look and feel. With a 50-year life span, they also serve as a sound investment of tax dollars. 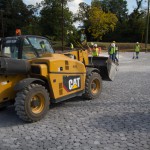 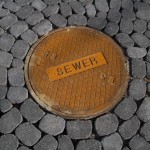 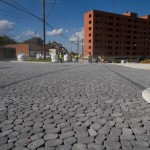 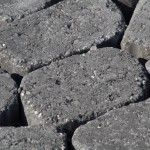