Contain rising stormwater through a 90-degree turn of a creek bed in an established neighborhood. 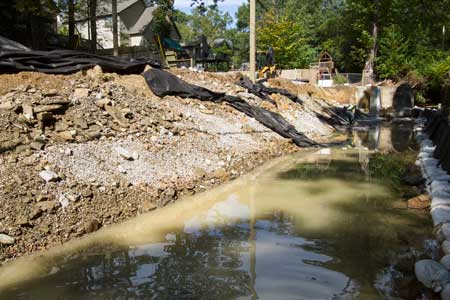 Shades Creek twists and turns its way through Birmingham, Alabama. When it reaches one of the city's over the mountain suburbs, the waterway flows through the backyards of an upscale residential area. The creek travels along a deep concrete drainage ditch that also contains a series of sanitary sewer lines.

Most of the time, Shades Creek contains minimal water so the two share the waterway without any problems. But that changes in times of heavy rain. That's when the creek floods and creates tremendous water pressure against the bank and anything else that gets in its path, including the fragile sewer pipes.

One of the worst problem spots occurs as the creek makes a sharp, 90-degree turn. Here, fast moving floodwaters have caused frequent damage to the sewer. Efforts to make the pipe more flood-resistant with steel rebar and concrete reinforcements were unsuccessful. In order to eliminate the need for costly reoccurring repairs, project engineers turned to a specially designed segmental retaining wall to help alleviate the problem.

Crews with Rock Hardscapes, LLC got into the streambed and dug out a 100-foot section of the drainage ditch to make way for the new retaining wall. They used 8-inch Anchor Diamond Pro units for the wall.

The first 50 feet of the wall was built with conventional geosynthetic reinforcement. But the second half of the wall presented a challenge. Because other sewer lines run parallel then tie-in to the ones in the drainage ditch, crews could not dig back far enough to install geogrid. The second half of the wall used a construction solution known as Anchorplex™. Don Armstrong, Chief Engineer for Anchor Wall Systems, says Anchorplex was ideal for this situation.

"When they got to the point where that pipe was just too close to the back of the geogrid they could not make the excavation without jeopardizing the safety of that pipe," he says. "In order to keep that stable, they had to move the excavation closer to the wall. They didn't have room for the geogrid so they switched design methodologies and started looking at it from an Anchorplex stand point." 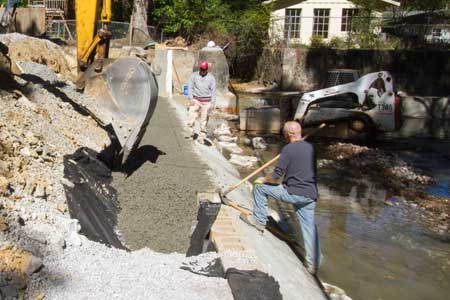 When used in combination with blocks of the appropriate shape, the structural backfill attaches itself to the wall facing, effectively extending the depth and increasing the mass of the facing. "Anchorplex is simply a structural backfill material that is poured directly behind the block to make more of a gravity mass that resists earth pressures," says Armstrong.

Anchorplex was delivered to the job site in a ready mix truck then placed with the bucket of a backhoe. The structural backfill is a mixture of cementitious material, coarse aggregate and water. Once it cures, the resulting material has at least 25% voids. "Not only does it act as a mass, it also acts as a draining medium," says Armstrong. "It's designed to be open-graded with a 20-25% void ratio so it's very free draining. Water will flow in and out."

This ability to handle water flow makes Anchorplex ideal for the problem spot in the turn along Shades Creek. During the next flood event, fast moving waters will be absorbed by the new retaining wall and take the pressure off the sensitive sewer lines. The new nine-foot high wall towers over the stream bed, protecting the pipelines and providing an attractive addition to the backyards adjacent to the creek. 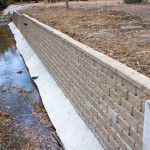 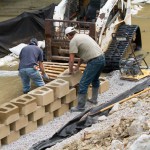 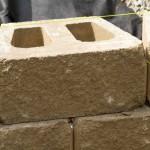 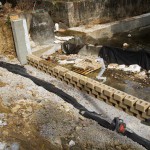 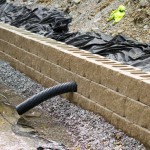